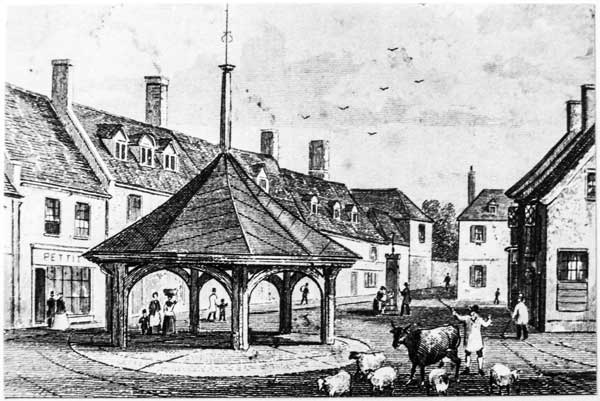 A brief history of Mildenhall

THE HISTORY of the small market town of Mildenhall can be traced back to Anglo-Saxon times, although nothing remains of the original settlement except for a large cemetery just outside the limits of the present town. The Domesday survey of 1086 recorded that the town was well established with a church, a mill and a total of sixty-four families, not to mention a flock of a thousand sheep. The whole of the manor of Mildenhall belonged to the abbey of Bury St Edmunds and the abbot had total control over the area, including the right to hang criminals in the market-place. On a less macabre note, a weekly market on Fridays has been held regularly since 1412 when a royal charter for this was first granted. An annual two-day timber and servant hiring fair was also held on Fair Spot Field, the site of the present Riverside School, until about 1850.

Dissolution of the monasteries

The manor of Mildenhall was confiscated by the Crown at the dissolution of the monasteries in 1536 and later sold to Sir Roger North of Kirtling, whose son Henry settled in Mildenhall soon after 1586 and built the manor house. The estate passed through four generations of the North family, some of whom were prominent in national politics and all of whom were staunch royalists — King Charles II stayed at the manor during one of his regular visits to Newmarket. The last of the local Norths, Sir Henry, was a melancholy man who shot himself in the manor house in 1671 but, being lord of the manor, was buried in the parish church rather than in unconsecrated ground as was normal then for suicides.

The estate passed to Sir Thomas Hanmer, Henry’s nephew, who became a famous speaker of the House of Commons. Sir Thomas extended the manor house and gave the town four almshouses and a workhouse, all in the churchyard. It is said that he married twice, once for love and once for money but was successful in neither: his second wife eloped with his cousin, Thomas Hervey.

Sir William Bunbury, Hanmer’s nephew, inherited in 1747 and Mildenhall remained in the hands of this family until the final break up of the estate in 1933. Legend has it that in 1780 Sir Thomas Charles Bunbury tossed a coin with Lord Derby to decide whose name should be given to a new race. Derby won the toss but Bunbury’s horse won the first Derby.

The ancient parish of Mildenhall, which included the hamlets of Beck Row, Holywell Row, Kenny Hill and West Row, covered 17,000 acres and was the largest in Suffolk. The parish was so extensive because much of the land was of marginal value and a large area was required to support the population. The following account by the 2nd Earl of Oxford, who was clearly not impressed by the area, gives a graphic description of the landscape in the eighteenth century:

“The next day Thursday, September the 21st, 1732, we set out from Brandon, seven long, very long miles to Barton Mills over the sands, terrible tedious travelling both to man and horse. I could not but reflect what terrible travelling it must be where the heat of the sun is intense upon the wide sandy deserts, where the poor travellers are often smothered with the sand or scorched with the sun’s heat reflected from the burning sands. We leave the sands at Barton Mills which we were very glad of. The river that runs by Barton Mills is navigable as I said to Bury. We left Mildenhall, the seat of Sir Thomas Hanmer, on the right hand, a most miserable situation. On one side he is subject to be choked with sand, on the other he lives close to a dark vile black fen which lies to the north east of him; so that he enjoys that wicked wind with the addition of the air from that fen.”

The landscape has changed much since then. The fens have been drained and now comprise some of the most fertile land in the country. The dry Breckland area, formerly used mainly as rabbit warrens and sheep walks before becoming vast sporting estates, is now largely covered by the plantations of the Forestry Commission. Ancient man evidently found the region much more congenial than did the Earl of Oxford for there has been life here for at least half a million years, the date confidently ascribed to the traces of Old Stone Age man found at High Lodge, just outside Mildenhall.

The combination of the marshy fenland and the dry, easily tilled, Breckland was favourable to hunting and early farming so it is not surprising that so many traces of settlement, from the Old Stone Age onwards, have been found in the vicinity. The Romans had a ring of farmsteads around the fen edge and the fabulous Mildenhall Treasure, thirty-two pieces of silver tableware now in the British Museum, was discovered near one of these during the Second World War. Another Roman hoard, this time of pewter, was discovered in 1962 when the remains of a crashed wartime bomber were being excavated. 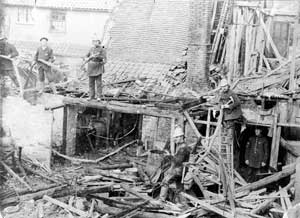 The economy of the town and the surrounding villages has, until recent times, been based almost solely on agriculture and Mildenhall has figured little in national history. However, in 1144 Geoffrey de Mandeville, the archetypal robber baron who changed sides frequently during the troubled reign of King Stephen, made the mistake of taking off his helmet to cool down while besieging the unfinished castle at nearby Burwell. He was struck by an arrow and retired wounded to die at Mildenhall. Then, during the 1381 Peasants’ Uprising, John de Cambridge, the prior of the abbey at Bury St Edmunds, was murdered on Mildenhall Heath.

Apart from such events as these the town lay low for centuries. The old open fields were enclosed in 1812 but the area suffered greatly during the agricultural depression of the later nineteenth century. The main London to Norwich railway could have come through Mildenhall but this was opposed by the local gentry; it was not until 1885 that a branch line from Cambridge appeared, but this was too late and too little to allow the town to expand to any extent, and finally closed in 1964.

The arrival of Bomber Command

All began to change in 1931 when Mildenhall was selected to be the home of the first of the Royal Air Force’s new style bomber bases. Building began then and the base was officially opened in 1934, just after the famous Great Air Race from Mildenhall to Melbourne, Australia had started from here on 20 October 1934. The race attracted enormous international interest and Mildenhall was at last in the limelight.

Crowds came to see such famous fliers as Amy Johnson and there were traffic jams for miles around on the actual starting day. The race was won by a de Havilland Comet, flown by C.W.A. Scott and T. Campbell Black, who reached Australia in less than seventy-two hours, an incredible feat for those days. The airfield was also in the news in 1935 when King George V, accompanied by his sons the Prince of Wales and the Duke of York, came for the first ever full review of the Royal Air Force in honour of the king’s silver jubilee.

RAF Mildenhall was an important British bomber base during the Second World War but, since 1950, has been home to the United States Air Force and is now one of the most important American installations in this country.

The arrival of the air force started to improve the economy but major development did not come until the 1960s when an agreement was reached with the Greater London Council to move families here from London. Many new houses were built and a light industrial estate established to provide employment for the newcomers. The town now has a secure industrial base and can face the future with some confidence.