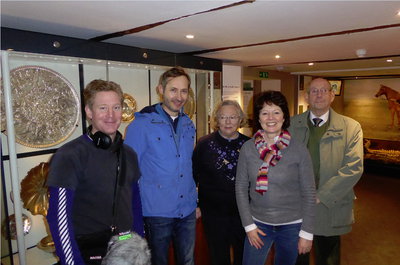 On Tuesday January 10th 2017 Mildenhall Museum welcomed Radio 4’s ‘Open Country’  [click here for link] presenter Helen Mark and producer Toby Field. They were in the area to record a new edition of the popular programme and had arranged to make a segment of it in the museum.

Helen taped her interviews in front of the museum’s replicas of the Mildenhall Treasure.  Richard spoke about the Treasure in its Roman context, while Mr Holder recalled his childhood memories of the hoard. (His grandfather, West Row Agricultural Engineer Sydney Ford was one of the Treasure’s finders.)

Also interviewed was Museum Chairman, Stephanie Palmer, who talked about the Treasure’s significance to Mildenhall Museum and the local community.

The Museum’s volunteers were very much taken with Helen’s friendliness and  impressed by the BBC’s relaxed professionalism. If they can find something else in the collections as the basis for a programme, we would willingly have them back!

If you missed it, you can catch up on BBC i-player [click here for link].

By coincidence, at lunchtime the same day about 300 people attended a lecture at the British Museum’s BP Lecture Theatre, given by Richard Hobbs.